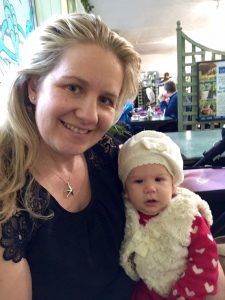 In this month’s member profile, we catch up with Victoria, a nanny who specialises in maternity work. Victoria’s work has certainly taken her places: from NZ, Australia, Hong Kong, Washington, Zurich, London, Prague, the Bahamas and the list goes on and on! Through her career, she has worked with amazing families all over the world (she even met her husband while working in the Bahamas how romantic is that?) and is now raising her own young daughter while continuing in the career she loves.

How did you get into nannying and maternity work?

I have always loved babies! As a teenager, I started babysitting and in late high school I heard about a New Zealand nanny school. I applied and was accepted into the program, spending a year at Rangi Ruru Nanny School doing my training which I just loved. Since then, I’ve spent 14 years as a nanny and later got my first job as a maternity nanny for a family I had previously worked for.

What services do you offer?

I specialise in overnight care and support for new parents. This includes writing routines, suggesting products, breastfeeding support and also someone to just talk to. I occasionally do day work and travel roles, and also help clients with finding a nanny. When I’m not busy with overnights, I also do phone consults and sleep training for older children.

How do you juggle a young daughter and a busy career?

The great thing about my job is that I mostly work nights! This means I get to put my daughter to bed and am home just after she wakes up. I am also very fortunate to have a supportive husband and family who are a great help.

You’re a Kiwi living in Brisbane – tell us about the journey in between?

The journey in between has been a massive adventure! It started in Perth, Western Australia and then I went to Hong Kong for four months, then to Washington D.C where I got a job as a temp nanny for the Saudi Royal family working 24/6 looking after a six month old baby. They initially wanted me as a temp while they were looking for someone older and more experienced. Two weeks after I started, I was offered the role on a permanent basis. I then moved to London where I got a live-in job working for a British actor based in Prague where he was filming, and then we were based in London with frequent travel to L.A – often on my own with the 1 1/2 year old. After a year, I changed jobs as I wanted to just work Mon-Fri and be based in London. In London, I got a fabulous job looking after a 6 month old baby whose mother was returning to work. I then moved to Zurich, Switzerland as my British visa ran out – there, I spent a summer travelling the world and then worked a few months in Zurich for a family with two school-aged children. Then I moved to New York where I got a six month temp position working for a British family whose nanny was on maternity leave. I was sole charge of two young boys. I then moved to the Bahamas, where I again took a job with school aged children. We lived in the Bahamas during the school term and then travelled the world the rest of the time. This job provided me with the most amazing experiences, and I also met my husband whilst living here! After two years I moved back to New York as the family were moving to Colorado and my now husband was transferred for work. I got a job for a high-profile hairdresser and his wife, caring for their three month old baby. It was then time to move to Australia, where I got a job with an amazing family in Melbourne who had three children aged three and under: it was super busy and super fun! After 18 months my husband was transferred back to the Bahamas, so off we went. This time I was on a spouse visa so couldn’t work. I was offered a 24/5 role as a maternity nanny in New York for the family I had previously worked for. Again, the role involved lots of travel. I left once the baby was six months old and they no longer needed a maternity nanny. After this position I was offered another maternity position with a friend of theirs who was a high profile actress. I started three days after the baby was born and worked 24/6, often travelling overseas for her different work commitments. I finished when the baby was five months old as they no longer needed a maternity nanny, and before leaving I placed a nanny with the family.
My husband and I then decided to move to London where I took a maternity position for six weeks with first-time parents and ended up staying on as their nanny. I left after 18 months to have my own daughter.
After having my daughter, my husband and I decided we wanted to be closer to my family: so we packed up and moved to Brisbane!

You’ve worked with a lot of babies (and their families)! Can you share one of your favourite moments?

This is a hard one as there have been so many favourite moments! I think one of the most special moments was walking down the aisle at my wedding with two of the little girls I have looked after as my flower girls.
Another moment that stands out – although not a favourite – it was definitely eye-opening seeing photos of me online that the paparazzi had taken whilst I was working for the actress. It was an insight into the lengths they will go to in America to get photos of the babies and children of celebrities.

What do you think is the biggest challenge for Australian nannies at the moment?

I think it is that people still do not view it as a career and – unfortunately – some nannies don’t either. I hate hearing young girls say, “Oh, in a couple of years I will get a real job”! There is nothing more real than caring for someone’s child. That said, the attitudes are definitely better than 20 years ago when I started out. We are lucky in Australia that we have the Australian Nanny Association that is doing great things for the industry.

What has had the biggest impact on your career?

Early in my career, I had to leave a job after two years as my visa ran out. I had been with the little boy since he was six months old and the bond I had with him and his family was huge. It was the first job that highlighted to me how as a nanny you truly become part of the family. I cried for days after leaving!
The second one was going to work for a six and nine year old who had just lost their father suddenly in an accident. Prior to this, I had mostly been a baby nanny so suddenly working with older children was an additional challenge. I was with this family for two years as a nanny and house manager. I was basically the second parent. This was the hardest job I have ever had to leave. I had become so close to the entire family, particularly the six year old girl.

I’m inspired by the children I have cared for and the fabulous career nannies I have met along the way.

What advice do you have for nannies wanting to specialise in maternity work?

Get qualifications. Try and take nanny jobs with a baby. At first it might be an older baby but it gives you experience and quite often a sibling may came along – which is one of the best ways to get newborn experience!

How is it, working in childcare as well as caring for your own child?

Working in the childcare industry after having my own child is different. Nannying is long hours and you then have to go home and repeat the same jobs you have been doing all day. I first went back to work when my daughter was eight weeks old. I was working for a previous maternity client who had a baby two months older than my daughter – it was just for two short days a week, and my daughter came with me. It was a great way to get back into it. After moving to Brisbane, I took a three day a week job with two pre-schoolers and my daughter came with me one day a week, went to daycare one day and my mother had her for one day. It was a huge adjustment for me to be away from my daughter two days a week. I was lucky that the family I worked for were great. I left because they wanted someone four days a week which was too much for me, and I also wanted to get back into my maternity work.

To any nanny just starting out: get lots of experience in Australia and then travel the world with this fabulous job! One of the most important things you can do is make sure your CV looks great. Families overseas typically want nannies who have at least five years experience and have stayed in their jobs for a good amount of time. Qualifications also go a long way. Travelling the world and working for families from all different cultures has taught me so much. I am also now lucky enough to have fabulous friends all over the world.

2021 President Report
December 3, 2021
The nanny dilemma – how can new nannies break into the profession, and what families should consider when they cannot find their ‘unicorn nanny’.
April 20, 2021

What should I pay my live-in nanny or au pair in Australia?
October 9, 2020
About Us
Latest News
FROM OUR GALLERY